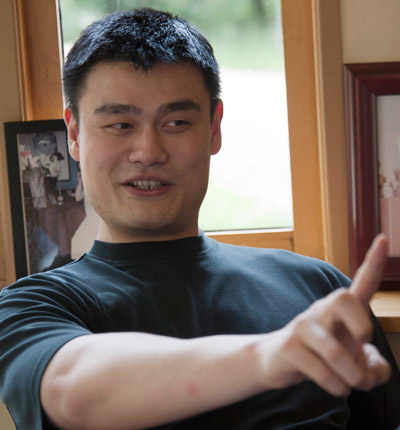 It’s a warm summer evening in the Napa Valley and the clink of glasses echoes along the restaurant-rich main drag of tiny Yountville as two weddings, a college reunion and the usual Friday night dinner crowd get ready for some serious wining and dining.

Suddenly, heads turn and eyes widen as a tall man, a VERY tall man, walks into Michael Chiarello’s Bottega restaurant. Is it? It looks like … yes, it is Yao Ming, the retired Houston Rockets star who last year started a second career with his Napa-based Yao Family Wines.

No doubt about it, at 7-foot-six, the first thing that strikes you about Yao is his size. But it doesn’t take long before you’re impressed by other things, like his gravity, intelligence and complete lack of diva-tude.

How serious is Yao about his new line of work? Well, I’d hoped to meet him at this year’s Napa Valley wine auction, where Yao Family Wines had a lot in the live auction. Turns out he couldn’t make it because he had finals. It’s true. A guy who is more than set for life financially is polishing up his business acumen by studying for an economics degree in his hometown of Shanghai and plans to get an MBA after that.

Yao was hosting the dinner to give a sneak preview of a new wine to be released soon, the 2010 Napa Crest which will retail at $48 a bottle. That’s quite a bit less than the winery’s two other releases, a Napa cabernet sauvignon priced at $150 and a Yao Ming Family Wines Reserve Cabernet Sauvignon, produced in very small quantities, that goes for $625. The wines are primarily cabernet sauvignon with other Bordeaux varieties such as merlot and petit verdot blended in and are delicious.

Obviously, a $625 or even $150 price tag is not for every budget, including mine, but I asked Thomas Hinde, president and director of winemaking at Yao Family Wines, about that $150 price tag and he said it came from benchmarking the wine with quality Napa cabs and 3rd- and 4th-growth Bordeaux and setting the price accordingly.

(Funny story. I took my resident expert in all things basketball and Chinese, Mr. Ho, to the dinner. As I’ve mentioned a time or twenty, he’s a little on the frugal side and I asked him what he thought about a wine priced at six-twenty-five. “It’s good,” he said. “I’d buy this.” I was stunned. Could this be Two Buck Chuck’s No. 1 fan talking? And then I figured it out. “Honey,” I said, “it’s six hundred and twenty five dollars, not $6.25.” “Oh,” he said.)

Yao is interested in being part of China’s booming wine market and his wines were first released in his home country. He told me that he was introduced to wine by his dad (both Yao’s parents were basketball players in China) and continued his education as an NBA player through going out to dinners with the other players and enjoying a glass of wine. “At that time, I don’t know what is good or what is bad, I just want to enjoy the moment,” he said.

Yao, who retired two years ago, has since developed his palate and gives input on the style of Yao Family Wines. He sees wine as something like “a time machine that can bring you to a special moment when you can just relax.”

Ultimately, selling wine is a business, “but it’s a very lovely business,” he said. “You not only sell this to make a profit. I believe it changed my life. I believe that it will change others, too.”