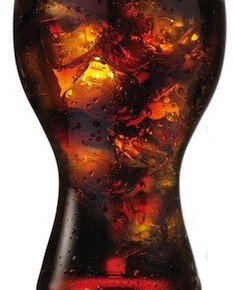 When I was in daily news I sometimes worked on stories so big they were sent out as a bulletin series — two or three short sentences that moved on high priority. So, Twitter without the snark, basically. I mention this only because I wish I had something like that to highlight today’s big, big news which is that Riedel,the fancy pants German glassware company, has designed … a special glass for drinking Coca-Cola.

The bespoke beaker costs a mere $19.90, or about $19 more than the drink itself, and it’s curved in a way that is reminiscent of classic coke bottles and those ’70s Coke glasses that were popular for a while. According to the company website the glass is “made to enhance the drinking experience” and was developed by a tasting panel of “industry experts and Coca-Cola lovers.” The design of the glass “captures the distinct spices, aroma and taste of Coca-Cola and creates a magic sensorial experience.”

OK. For a magic sensorial experience I will fork over 20 big ones.

Reaction to the news was swift.

Riedel designs glass especially for drinking coke. This is not a joke. I wonder what it WOULDN’T design a glass for? http://t.co/1YYefgg7y0

Alex Redfern, a Londoner working in the wine trade, was suspicious.

Come on Riedel. A coke glass! It’s way too early for an April Fools. http://t.co/g0mjeGhKjW

But Maximilian Riedel, the charismatic leader of the company, was perfectly serious.

It is official!!! #CocaCola and #Riedel have been working on a #glass which shows the #Iconic #taste of #Coke at… http://t.co/hpfYuDolVp

If you follow Riedel, this won’t come as a huge surprise. The company makes a wide range of glasses that are alleged to enhance different drinks including a chardonnay/chablis glass for regular wines made with that grape which is not to be confused with their Montrachet glass for chardonnays that hail from that fabled white wine region of France.

And after perusing the Riedel website I feel moved to tell you that one of the line of glasses offered is called the “Sommelier” with the tag phrase “mouth blown in Austria.”

Now that sounds like something worthy of a bulletin series.