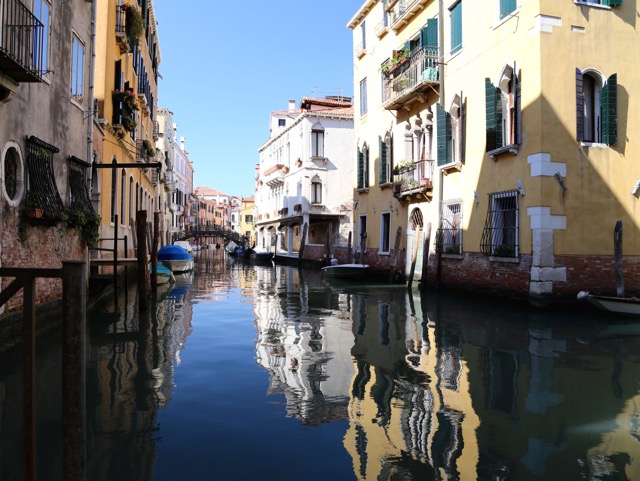 Sure, the real deal with the singing guys in the striped shirts and cute hats is crazy expensive. Like over $100. Don’t bother. When you get down to it, it’s just a boat ride. Plus you do a lot of sliding slo–o–o-wly  under bridges packed with tourists staring at you and snapping pictures like it’s feeding time at the zoo. Instead, look for one of the gondola ferries, called traghetti, that locals use to get across places where there’s no convenient bridge. It’s around $2-$3 and although the ride doesn’t last long there’s time for a quick selfie. And while the operators aren’t quite as snazzy as the private gondola fellows, they DO wear striped shirts. END_OF_DOCUMENT_TOKEN_TO_BE_REPLACED 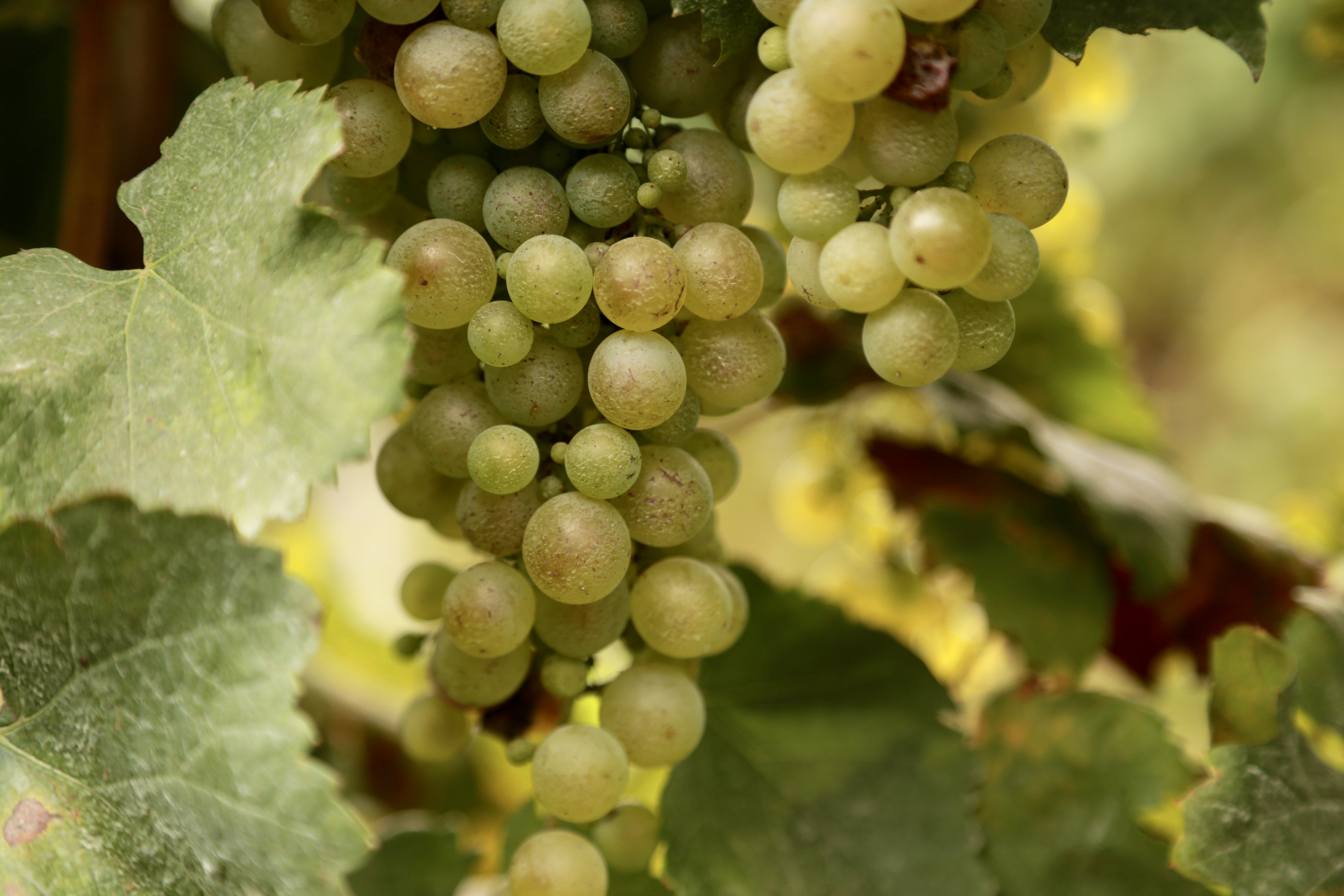 TREVISO, Italy — You know prosecco as the fruity Italian bubbly that’s a fun and affordable way to celebrate the holidays as well as a bright accompaniment to a light meal. But this popular sparkling white wine can also be part of your vacation plans. Just like that other famous fizz, Champagne, it hails from a region that welcomes visitors who like to travel glass in hand.

From exploring hillside villages to strolling beside the tranquil canals of the city of Treviso, there’s plenty to do, eat, see and sip in prosecco country. And since this is still a relatively undiscovered spot, prices aren’t at the sky-high pitch of better- known places.

Here are a few things to know before you go.

Click here to read the rest of this story published by the Associated Press. 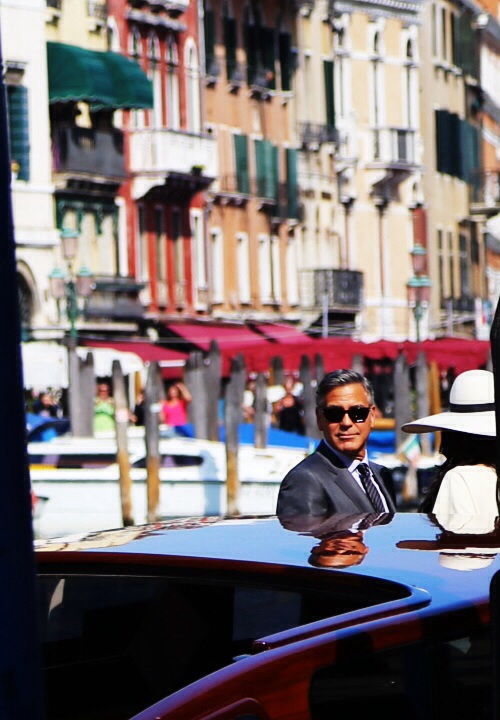 Somehow, my invite to the wedding(s) of George Clooney and Amal Alamuddin got lost in the mail. Luckily, I didn’t let a little thing like that stop me from showing up.

As it turned out, I was too busy to attend the Saturday event, an informal ceremony followed by a hohum party featuring Clooney chums Matt Damon, Bono and others. But Monday morning, when they popped into Venice City Hall to seal the deal with an official ceremony, I was ready to go.

I started the day the proper Italian way with a coffee and a pastry. Yes, it was a caffe Americano, what can I say, I do not get the concept of espresso, but the rest of it was pretty darned authentic. 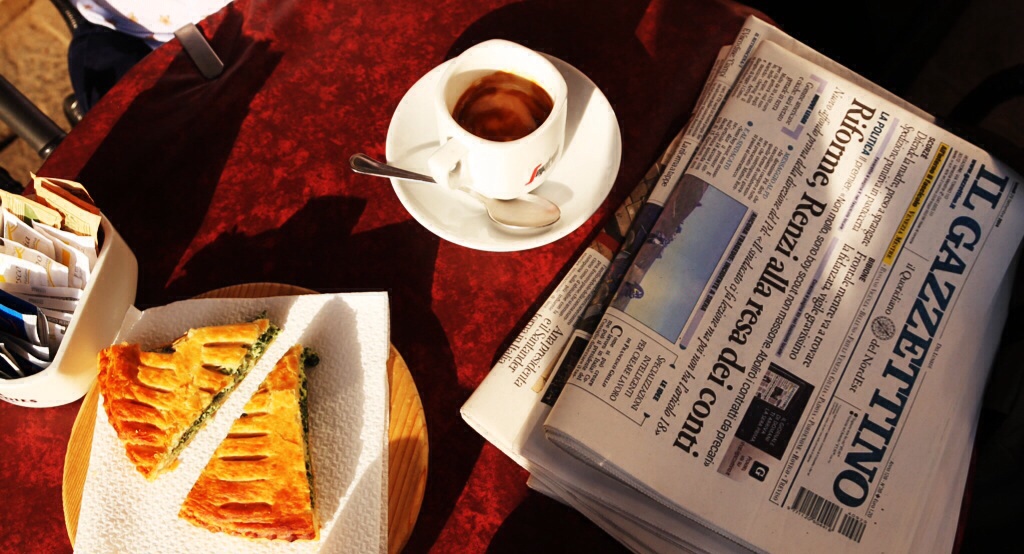 Not that I’m complaining.

The alleys of Venice buzzed with Clooney’s name as tourists and locals alike giggled over the chance of a celebrity run-in. Well, except for one dear old lady who was curious to know why so much fuss about this “Mr. Bruni.”

Then followed two and a half hours of waiting enlivened by the emergence from the pre-renaissance City Hall of wedding parties that did not include a Hollywood star.

This attractive couple from Austria sailed off in a gondola toasting themselves and the crowd with sparkling wine. 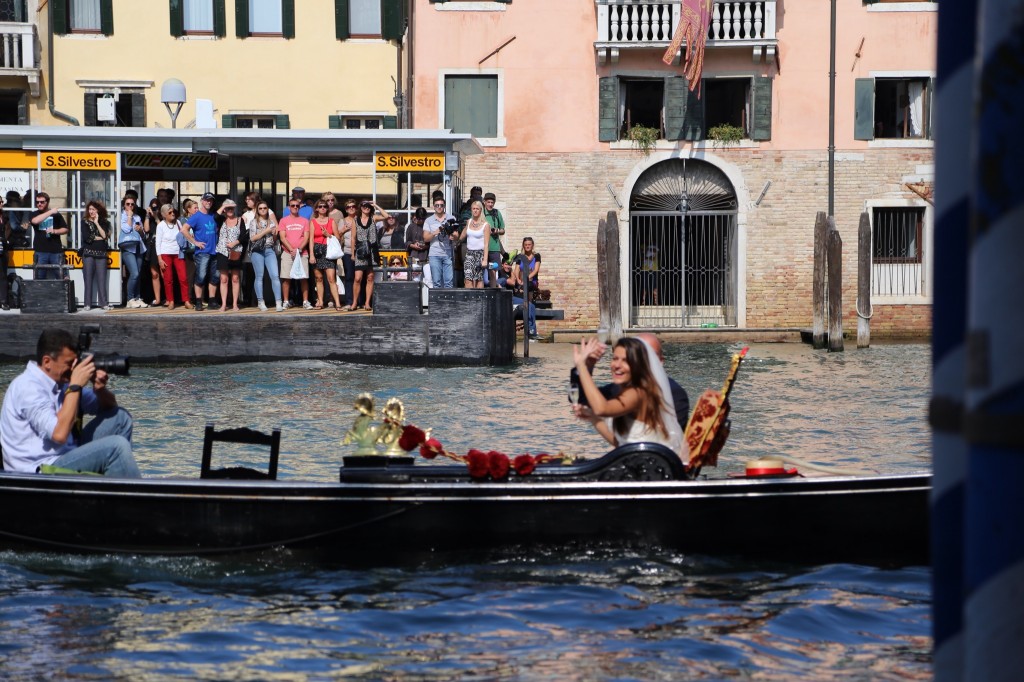 I did not envy them the gondola but I did covet the bubbles.

It was getting a bit boring when suddenly there was a roar of motors and the wedding party appeared, escorted by police boats. (Police boats! Ambulance boats! Little traffic signals on the canals! Being in Venice is like stepping into your childhood storybook about Places Around the World.)

I was standing next to a nice lady from Holland named Ilse and a professional photographer I affectionately nicknamed Bluto. But not out loud. He was rocking a curly beard, a man bun and not so much a six-pack as the full keg. So clearly not a fellow to trifle with.

When G&A came out of the mayor’s office all hitched up George obligingly stood in the front of his private launch and waved to the excited crowds lining the banks of the canal. I’m telling you, that guy can do old-style Hollywood glamour like nobody’s business.

I extended the lens of my trusty Canon as far as it would go, leaned out over the water and clicked away for dear life. I got a lot of the backs of peoples’ heads, some weird shots of the sky and this one shot at the top of the post that is a little out of focus but, I won’t lie, is the most exciting picture I have ever taken.

Then the newlyweds zoomed off to the airport in their gleaming craft called the “Amore” — of course — followed by a flotilla of police and paparazzi.

(Italian media reported that the couple had sold exclusive photo rights of the wedding to Vogue for $1.5 million which will go to help the people of Darfur, a worthy cause. If anyone is interested, I am willing to sell my photos, too, but I fear proceeds might be a bit less and most likely would go to the people of Michelle.)

By early afternoon it was all over at City Hall. The crowds, the boats, the excitement — all gone and nothing left to mark the event of the day save for a faint dusting of confetti on the worn paving stones of La Serenissima. 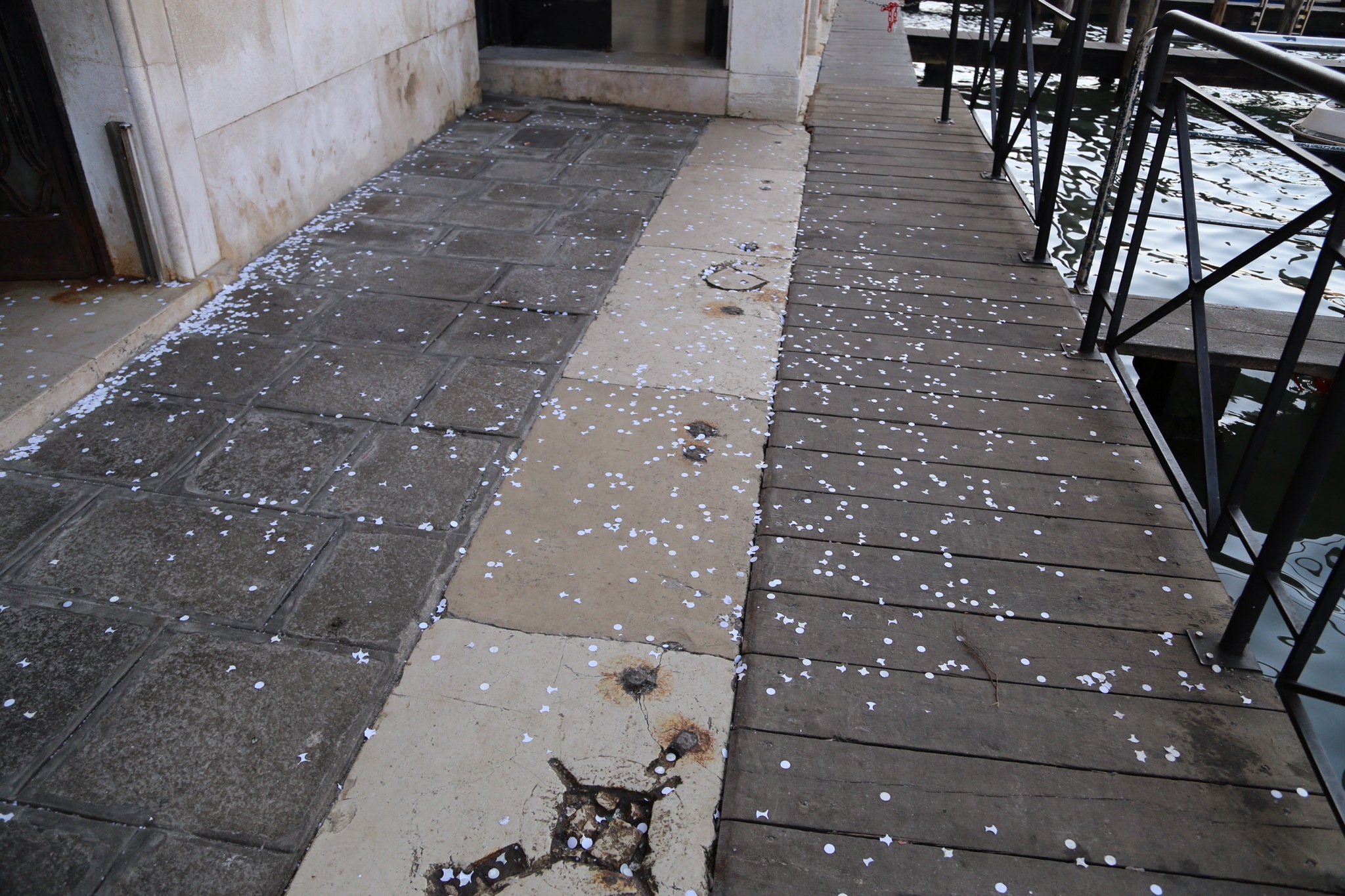 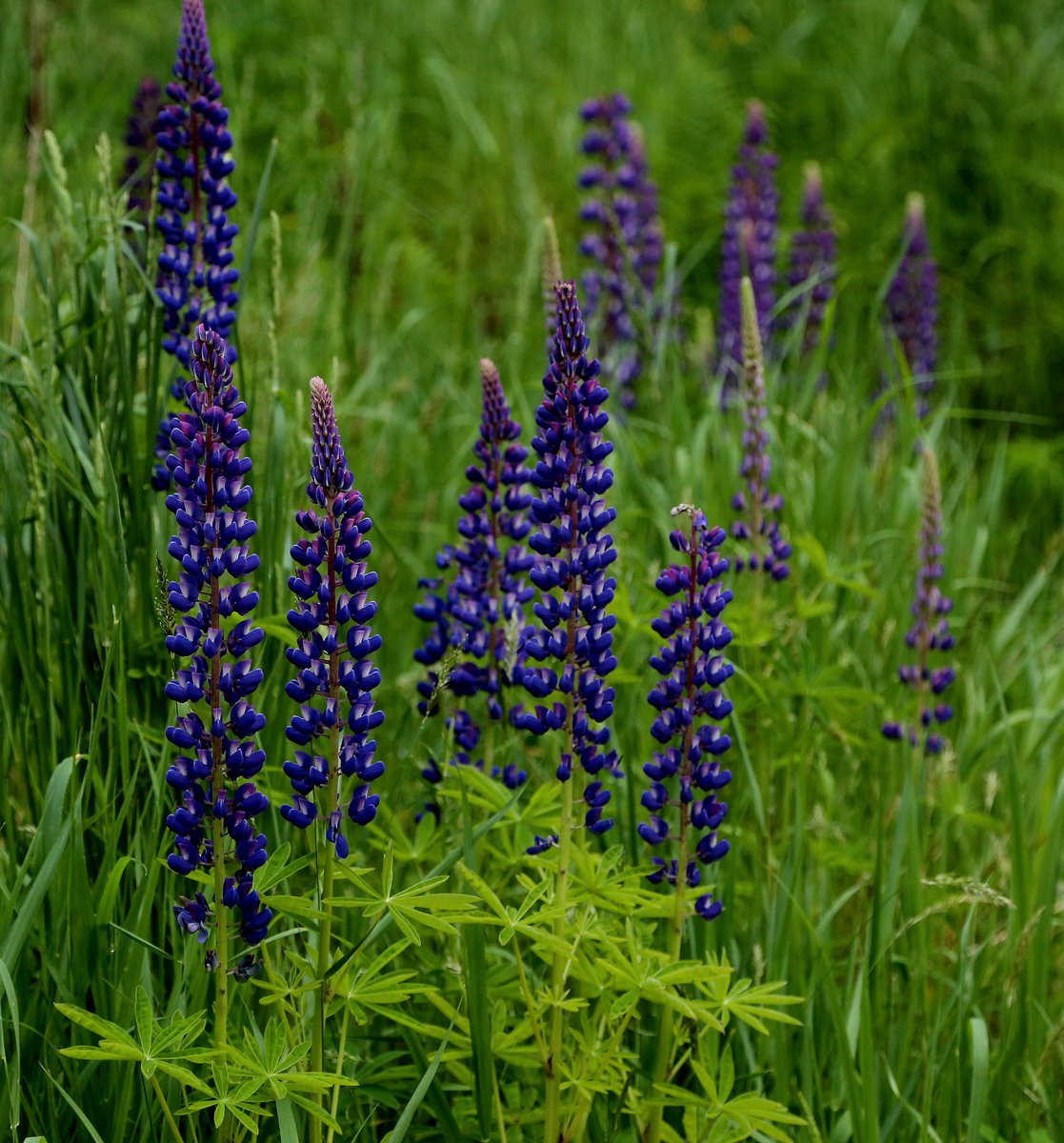 The Hotel Saturnia & International, Venice, has got it going on location-wise. It’s close to St. Mark’s Square, sits on an upscale shopping street and has its own little canal dock for when you need to get a water taxi to the airport in a hurry. Added to that is a tasty and filling breakfast included in our rate and a handy little bar/restaurant that is fun to duck into on your way out or when coming home from a night on the town.

In summer, breakfast is served outside in a little garden court and there’s also a sunroof with a nice view of the city.

Set in a charming century-old building, the hotel has a variety of rooms at different prices. Ours was one of the humbler rooms and wasn’t exactly spacious. A double, it had the requisite two beds but there was only just room for them and an antique dresser, wardrobe and narrow desk. I liked the furniture, no cookie-cutter Holiday Inn here, and really enjoyed the fabulous chandelier hanging from the ceiling. The bathroom was adequate and both bathroom and bedroom had windows opening to a decorative balcony. WiFi was not lightning fast but did work and didn’t cost extra, a big deal in my book.

For the rate we paid (about $250/night through Booking.com) this was a good deal. Staff, by the way, were awesome and, in some cases, handsome to boot.

I would say for the money, this hotel can’t be beat. Just one caveat: Bring earplugs. This has got to be the creakiest hotel I ever stayed in. Floors, beds, stairs all set up a symphony of squeaks, but since I NEVER travel without industrial-strength earplugs plus comfy eye mask I slumbered peacefully through it all.